évasion (duet) is a 2-channel moving image and audio installation that restages Harry Houdini’s famous straightjacket escape. It is a new iteration of the multi-channel video and responsive environment called évasion created in 2014.

On one level, the work explores contemporary media artists’ relationship to pre and early cinema optics, tracing the continuing influences – and convergences – of early cinema’s engagement with movement. In particular, we are informed by the work of Étienne-Jules Marey, as well as Charles-Émile Reynaud’s praxinoscope, a pre-cinematic optical device and toy invented in 1877.

évasion (duet) asks: what else can moving images do beyond being spectacular devices or action movies? As artists, we use this work to explore some of the aesthetic and temporal forces between movement and perception in both new and older media practices. Our aim was to digitally re-perform the performance of an escape artist – himself re-performing the infamous escape from a straightjacket by Harry Houdini in the late 1890s.  But our contemporary escapologist never escapes. Just as he seems to be finally freeing himself, the present day escape artist is thrown back to the beginning, in a series of loops that trap him within the unfolding video performance.

The performance in évasion (duet) was shot on HD video at 4k resolution with a frame rate of 100 frames per second. The greater depth and clarity of the high resolution image allowed us to exploit the work’s cinematic aesthetic; the faster frame rate gave the option of considerably slowing down the movement of the escape artist. And so the combination of the footage at 100fps with the often-abstract forces of the thrashing straightjacket confused the direction of the motion. Forward motion in the performance began to move as if in reverse. The forces of movement – camera, body, straightjacket, podium, performer, air, dust particles – exceeded what was shot. 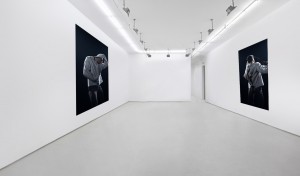 Example of how the work is to be displayed

The sounds that fill the room are drawn from recordings of our escape artist’s performance. They mix with and escape from other sounds: low vibratory chords and the ethereal cries of birds. A stereo system with ceiling mounted speakers in opposite corners of the room will provide an immersive experience of the soundscape.

The work was shown at Bega Regional Gallery, Australia for the exhibition Motion: the body and movement in contemporary art, 17 July –22 August, 2015 and will tour Australian regional galleries in 2016.

évasion  is a multi-channel moving image and responsive audio installation that explores the contemporary and historical visual cultures and practices of illusionism. The work’s initial premise was to draw out the confluences between cinematic devices and techniques, Victorian magic and contemporary media’s optical trickery. In this installation and responsive environment, we filmed a professional escape artist, Ben Murphy, performing Houdini’s famous straightjacket escape.

The work explores movement as a force or forces that are not so much performed or simply ‘enacted’ by a body but instead become the directly imperceptible energetic field from which moving bodies and moving media themselves arise.

The installation plays back sequences of the escape performance across 8 separate flat screens in a manner that both break-ups and restitches it. Arranged in an octagonal configuration, the audience circumnavigates the screens watching the escape unfold with each screen playing back its own angle and tempo of events. The circumnavigation promises to reveal how the escape ‘works’, but the installation is a perceptual illusion; more of the escape unfolds yet less of the trick is revealed. But work multiplies beyond the ‘narrative’ of escape toward an expression of movement itself, distributed across not one but several performing bodies. The installation is not so much a visual representation of a performer’s escape but rather an expression of the movement that courses through, conditions and yet directly eludes our visual grasp of the scene.

évasion’s soundscape is responsive to the viewer in the space. Tracking their position, the sound seems to move ahead of the viewer’s movement around the installation. Sensors detect audience position and trigger audio to travel ahead of the listener. Like the escape artist, the sound also threatens to escape from the audience. Unknowingly you actively engage with the media environment you perceive. Looking, hearing and moving are not separate modes of sense perception: they become relational and more-than the individual human subject’s perceptual system. And in such a way, we hope to move toward a practice concerned with an ecology of media-perception. 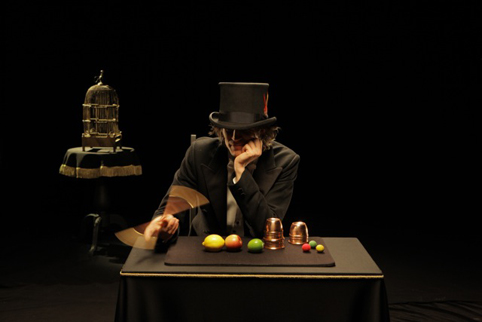 HokusPokus examines illusionistic and performative aspects of magic to explore human perception, senses and movement. It takes inspiration from recent neuroscientific interest in magic as a way of unraveling the relations between vision and movement in human perception. A magician appears on 3 separate screens performing tricks that use sleight-of-hand and deception. How the tricks unfold over time and across the screens depends on the participant’s movements and reactions in the space. 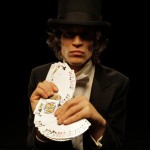 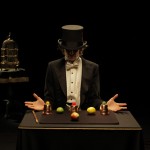 HokusPokus visually references 19th century magic, early cinema and traveling science shows, alluding to the proximity between the history of magic and the genesis of both optical time-based media and  and the brain sciences . The installation continues Michele Barker and Anna Munster’s artistic research into perception, neuroscience and the histories of visual culture and media.

In this two-channel installation, we explore the heritage of Duchenne’s smile from the staging and construction of ‘genuine’ expression in the development of 19th century neurological science through to attempts to capture facial expression in contemporary face recognition software. Are images and declarations that ‘real’ expressions have been captured, part of a social and technical ‘machine’ or system of ‘true’ emotions? What affective and institutional politics arise from this typology of ‘real emotions’? A typology which supports such diverse social and organisational forms as: ‘the police’; PR and marketing; the security and the self-help industries. 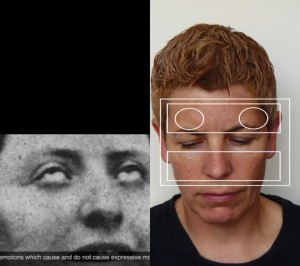 The Duchenne smile has become a moniker for ‘genuine’ felt facial  expression. It’s a smile that is said to only occur spontaneously when the muscle that orbits the eye is active in addition to the muscle that pulls the lip corners up. The term was coined by contemporary psychologist Paul Ekman in 1989, but its namesake is Guillame Duchenne de Bologne, a neurologist hired by Charcot (the founder of neuroscience), to work at the Salpêtrière during the middle of the nineteenth century. While working there, he taught himself photography, which he used in conjunction with an array of electrocution techniques on patients to stage portraits of types of facial emotions. Attached to the patients were various electrodes that would contract the facial musculature into a grim array of emotional states ranging from terror to ‘genuine laughter’. Many of these photographs made their way into Charles Darwin’s popular treatise The Expression of the Emotions in Man and the Animals (1872) as evidence of the evolutionary phylogeny of shared animal-human emotional heritage. 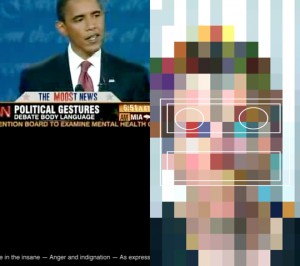 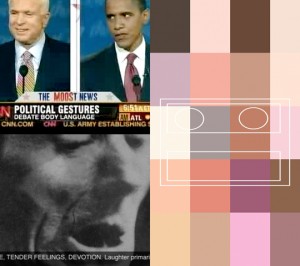 Something which does not show itself, 2008. Single channel video

Something which does not show itself

‘Aura hysterica: the sensation of an acidic burning in all the limbs, twisted and almost raw muscles; the feeling of being glass like and breakable; a fear; a retreat from movement; an unconscious confusion of gait, gestures, and movements; a will perpetually straining to perform even the simplest gestures; the renunciation of the simple gesture; an astonishing, central fatigue, a kind of dead tiredness; the sensation of a wave…’ Georges Didi-Huberman, Invention of Hysteria 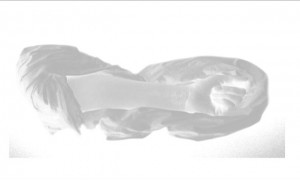 The single channel work, Something Which Does Not Show Itself alludes to the nineteenth century development of chronophotography and its attempt to capture the process of neurological damage, in stark contrast to contemporary MRI technology that seeks to capture the invisible. However, it should also be noted that chronophotography and its frame-by-frame instances of movement was a direct precursor to cinematic movement. What is interesting and different about chronophotography was that it often attempted to output the flow of movement instances back into the one frame. In a sense, this compression of movement confuses its start and end points, rendering it more as an ‘in-between’ or processural state. 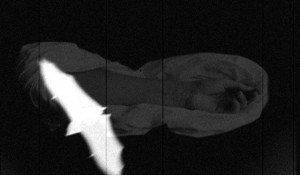 In Something, a dismembered image of a hand and forearm are encased in a white sheet.  The hand twitches randomly and is attempting to move and grasp an object. It loops but the hand has not completed its task – if, in fact, there was a task. Here, nothing moves, in a sense except that the rhythm of the loop is propelled forward by the inter-cutting of a camera shutter opening and closing. Nothing happens in this piece but neurological damage is being experienced.

Struck is a multi-channel video and sound installation that questions how we are able to gain an ‘understanding’ of disease through interpreting medical data and imaging. The piece addresses the development and implications of visualization techniques as they are used in the detection and interpretation of neurological disorders. The work continues Barker and Munster’s interest in examining scientific and medical representations of bodily and experiential difference, examining the convergence of different affective states with the processes involved in the visualization of disease itself. 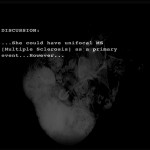 Struck is a multi-layered work, which critically address the effects of being diagnosed with a neurological disease. What are the 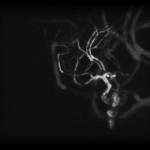 differences between clinical diagnosis and interpretation on the one hand, and experiencing neurological damage in one’s body, on the other? Rather than being an immediate emotional response to medical visualization and diagnosis, Struck looks historically at neurological diseases and specifically the technologies and imaging processes that have been used to visualize the brain and nerves.    In part, it reflects upon contemporary medical imaging techniques – with particular reference to Magnetic Resonance Imaging (MRI) – and the legacy these processes inherit from the late nineteenth century. The ‘discovery’ of neurological damage occurred in tandem with the treatment of hysterical patients in institutions.  Often the bodily gestures and expressions of hysterics and neurologically damaged patients were mistaken for each other.  Struck recalls this confusion and asks us to assess whether contemporary imaging and diagnosis is really any more accurate or less confused a century later.